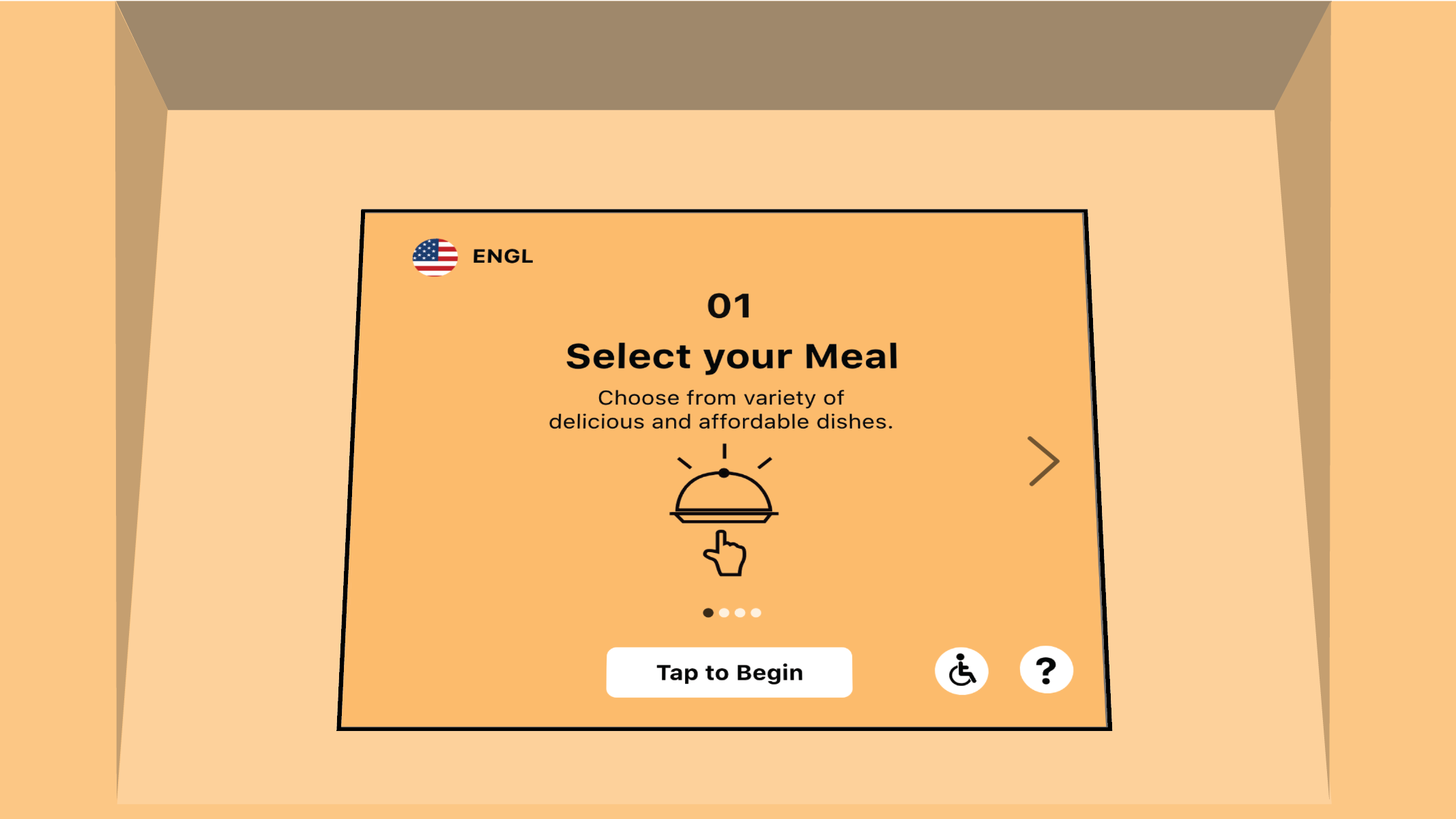 The purpose of this project was to come up with a product that utilized technology to bridge the gaps between people and technology as well as improve the human experience as a whole. To do this, we had to expand our understanding of users’ capabilities and utilize inclusive design principles in the development of our prototype. We also had to think more deeply about technological capabilities and establishing trust for them.

We began working on this project at the beginning of April by learning how to think about disability and engaging in empathy exercises. We then spent the next week developing our product ideas, producing a press release by April 19. On April 30, we conducted salon-style critiques of our prototypes and used the remainder of the week to incorporate the feedback from the critiques and produce a video demonstration for our product, which was turned in and presented May 6 and 7.

Lili Kiosks (Love In Little Instances) is making it easy for customers to fulfill their hunger and the needs of the less fortunate. The self-serve kiosks are being placed in local communities that allow people to conveniently purchase restaurant quality meals from our extensive menu. Customers will be given the option to receive their food hot and ready to enjoy on the spot, or frozen to heat up at their convenience. Every purchase that is made leaves a credit in a kiosk for someone in need to redeem, at no extra cost to the customer.

Read the rest of the LILI Kiosk press release.

We wanted to create a product that made it convenient for people to both get hot meals and to give back to their community. These days it can be difficult to find the time to eat a hot meal, and we wanted to cater to people who might not have time to prepare their own meals ahead of time or don’t have the time to go to a restaurant to buy something. Additionally, many people want to help those in need, but they may not know the best way to do so. LILI Kiosks provide a simple and direct way for people to do that.

We also wanted to create something that would make it easy for people who are in need to obtain hot meals without fear of judgment or having to prove their need. By placing the kiosks in well-traveled locations outdoors, anyone can walk up and use one without having to worry about being turned away. The kiosks provide a safe and convenient way for those in need to get food without having to go through what could be a lengthy and tedious process to get approved for food assistance benefits.

Most of the design feedback received during the salon-style critiques was aimed towards streamlining and simplifying the prototype to make it easier for users. This included suggestions to eliminate buttons that had no function or would be confusing to users. Another suggestion was to combine the purchase option screens instead of having one at the beginning of the process and another again at the end. To simplify the prototype, it was suggested that we add icons to the protein option buttons and change the colors of the temperature buttons so that they were instantly recognizable to anyone regardless of their language ability. People also suggested that we slow down the initial tutorial screens and add navigation buttons so that people could read the screens more easily.

Some suggestions for future consideration are to add a function to allow users to make a donation without having to buy a meal themselves, as well as consider a way for people to buy multiple meals at once. Typically vending machines only allow you to make one purchase at a time, but there are definitely scenarios where a family or group of people might want to buy several meals at once instead of having to buy them one at a time.

Another thing to consider is the impact of the meals’ packaging on the environment. Most meals of the kind that would be sold in LILI Kiosks would probably be packaged in some kind of single-use plastic. Ideally, we would be able to use some kind of sustainable packaging, either biodegradable or edible.

The most challenging part of the project was thinking of ways to create a product that could accommodate two very different kinds of customers. Since the product has to be accessible to both paying users and users who would need to use a credit, we had to consider the best way to reach both at the same time.

I enjoyed the challenge of creating an interactive product for a different type of device. Like a tablet, I don’t often interact with kiosks, so it was interesting to look at different kinds of kiosks to see how they’re used and designed.

The least enjoyable part of the project was probably coming up with a novel idea. We struggled for a long time to settle on an idea before writing the press release. Originally we wanted to try something unrelated to food since that was the focus of our last project, but were unable to come up with another idea. I would have liked to explore a different type of problem, but I think it was still interesting since the food delivery method was very different.

Since this was my third project working with the same group of people, I think our creative process was much more streamlined than it has been in the past. We shared our ideas more quickly and collaborate more closely on this project. We spent more time discussing our ideas by meeting in a Google Document before splitting up our responsibilities and working on our own. We had started doing this in the previous project, but we made more time to do so this time. This made it easier to make sure everyone was on the same page as far as where the project was going and what needed to be done.

It was a little more challenging when it came to working on the video demonstration since we haven’t had to produce a single motion piece together in the past. For this part of the project, two group members provided the footage while the other two worked on the post-production. Instead of working at more or less the same time on the same thing, we instead had an assembly-line style workflow until the end, when we got together to make small edits and add the narration.

Having a group to depend on was very helpful in juggling the responsibilities of having to come up with an idea, determining the method of physical and digital interaction, and creating a video demonstration. Having others to brainstorm with and split responsibilities made it much easier to manage the various deliverables.

I am fairly strong at rapid prototyping and using After Effects to create product demonstrations. I need improvement in thinking of ways to better leverage technology to enhance the human experience. If I were to continue working on this project, I would like to think of more ways to incorporate artificial intelligence and other technologies to enhance the user experience. To improve in this aspect, I plan to continue my studies in Interactive Media III as well as to read more materials on my own to gain insight into what other designers are doing with technology. I would like to read more books about the subject as well as follow current designers on social media to see what is being done in this area.