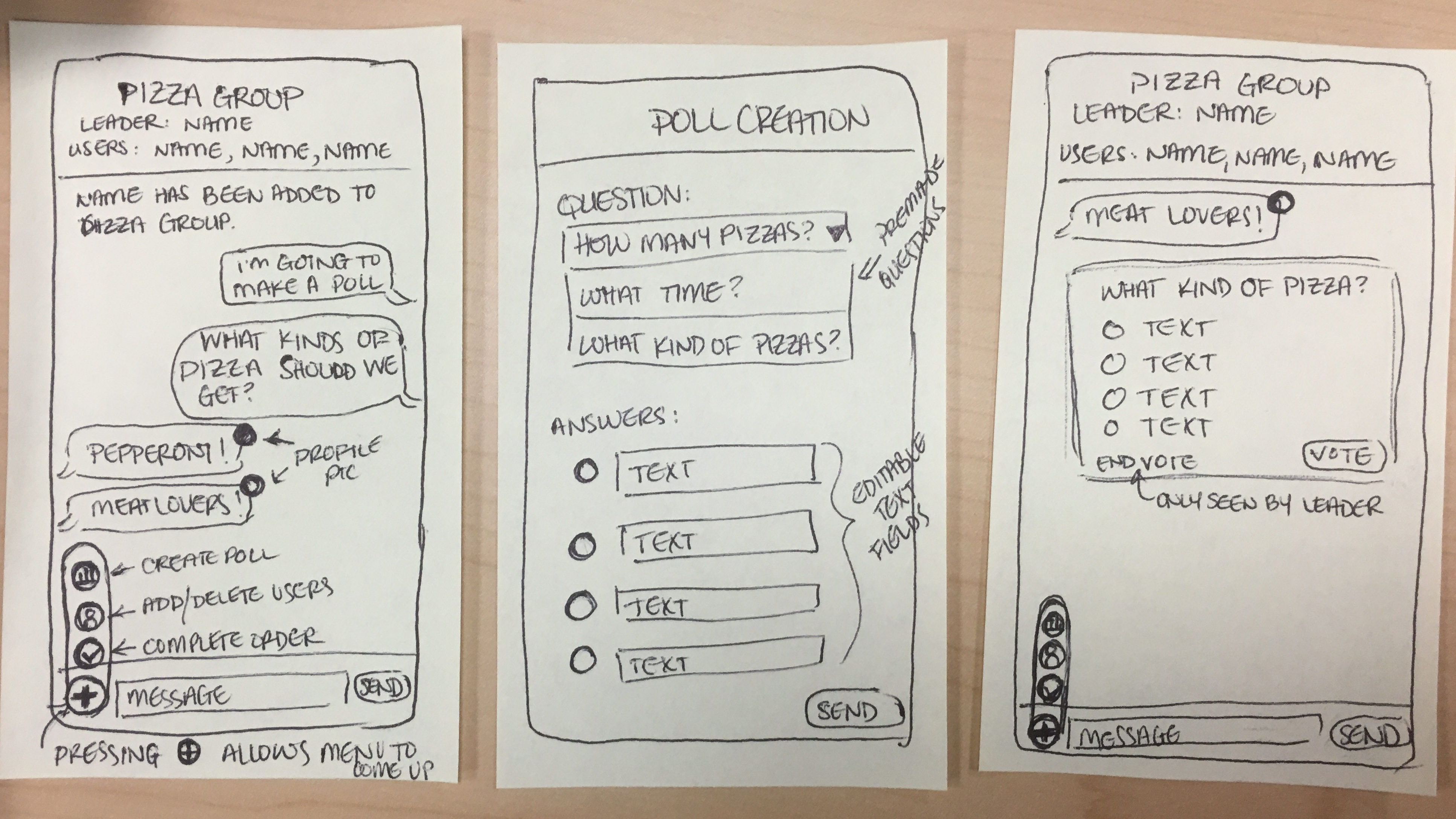 To maintain control of the growing market for food delivery, Domino’s needs to utilize technology to create a convenient and attractive method for groups of people ordering pizza in the midst of the many food delivery options available today.

Millennials in America and other countries spend nearly half of their food dollars on eating out, regardless of income. As technology advances, services like online ordering and food delivery are becoming a billion dollar industry. Though food delivery was previously dominated by the pizza industry, more restaurants are implementing their own delivery options or partnering with services like Uber Eats. The increase in food delivery choices can be overwhelming for those who just want to order food quickly and easily, especially within groups of people with disparate likes and dislikes.

Domino’s, as a forward-thinking technology company that produces pizza, is poised to take advantage of the growing opportunities in the food delivery market in a way that their peers are not. Our challenge for this design sprint was to capture the Millennial market’s attention and create a product to enable groups of people to order pizza together more efficiently.

The first part of the design sprint involved building a better understanding of the design problem and setting the team up to generate appropriate solutions. The team first got into a problem-solving head space by using the “How Might We?” method. This specific wording got the team to start thinking of questions relevant to the design problem, as well as prompting members to come up with initial answers to these questions.

Additionally, prior to beginning the design sprint, the team read assigned articles about both Domino’s success investing in technology and trends on eating out in the US. Utilizing the articles as background knowledge, the team discussed aspects of the design problem space, such as the current state of Domino’s and food delivery, as well as the target market. Given that Millennials consistently spend their food dollars on eating out, the team determined that they would be the target audience for the design solution. Since most people have a smart phone on them at all times, the most convenient solution was determined to be some sort of app rather than a website.

Finally, the team engaged in empathy building exercises to get into the customer mindset. The most enlightening part of this exercise was observing a customer as they went through the process of ordering a pizza from the Domino’s website. This allowed the team to evaluate the experience from the customer’s point of view and figure out what positive and negative aspects of the pizza ordering experience already existed.

The second day of the design sprint began with a discussion of similar design problems that had been successfully solved in other industries. Rowan discussed using gamification and reward systems to encourage continuous use of the app. I discussed Amazon’s use of rating systems, automated suggestions, and other convenience features that encouraged customers to order online rather than physically going to a store.

The remainder of the day was spent generating ideas through sketching. The team first spent time individually sketching at least eight unique solutions and then discussed them as a group. This was followed by a round of voting to determine the best solutions. Though some of the ideas we came up with were silly, we ultimately came up with a lot of really valuable feature ideas that the group found very exciting, such as creating pizza profiles and friends lists to enable customers to see at a glance what kinds of pizzas their friends liked to order.

Last, we each worked on more detailed sketches of our solutions to further flesh out the ideas generated in our previous discussions. This enabled us to think more concretely about what we wanted the product to look like and how we wanted to implement the features we thought were most important.

At this point in the sprint, the team had developed several ideas and had to determine which of these ideas would best solve the design problem and go into the prototype. The team started by discussing and evaluating each team members’ detailed solution sketches. Through this discussion, the team created questions and prioritized them according to what was most important in solving the design problem.

After voting, the team determined that a chat feature and split payment options would be essential to our product. The chat function would allow several people to create a group order together and discuss which types of pizzas they wanted to order. The ability to create polls within the chat would allow the customers to settle disputes regarding things such as toppings, while a code using “@” and “/” symbols would make it easy for those in the chat to quickly add and delete toppings from pizzas in the order. The split payment would enable groups of people to easily divide orders into separate checks for each user as well as share reward points in order to get free food items through the Domino’s loyalty program. This would encourage users to create group orders through the app.

With those features in mind, a list of necessary prototype screens was written up. The team put each screen onto a different post-it note and they were arranged to determine the basic app navigation. Finally, the screens were split up between each team member.

This part of the design sprint was the most challenging for a variety of reasons. This was the first app prototype most design sprint team members had ever made, and it was difficult to determine what functionalities were necessary to implement in the prototype. To help organize the team’s efforts, a document was created on Google Drive to share ideas, ask questions, and post progress.

The team had agreed beforehand to use Marvel to build the prototype, but then had difficulty getting all of the prototype screens collected into one Marvel project. Once all the screens were assembled, it was relatively simple to link them all together. The prototype can be seen here.

On the last day of the design sprint, the team evaluated the prototype with user testing. The team first spent some time developing questions to ask the users. Then individual users attempted to use the prototype. After the user was successfully able to order a pizza using the prototype, the team asked them questions about the experience. The team was able to administer five user tests.

A segment of one of the user tests can be seen in the video below.

Overall, the user testing was very successful. Every person gave positive feedback about the main features within the prototype, namely the chat function and the split payment and rewards. The main issue raised was that the navigation was a little limited in some aspects. For example, the app lacked a way to go back to the previous menu once you entered the chat screen. Users also tended to overlook some sections of the app, such as the menu. This was most likely due to the placement of buttons on the initial screens. Additional screens and improved navigation would probably solve these problems.

Users felt that the chat and split payment options were well-done, but one user pointed out that a chat feature was only useful if the people in the group chat were diligent about responding to messages. The team realized that the chat feature was mostly useful to groups who were ordering pizza from separate locations. For groups of people that were in the same location, the chat function was much less useful. However, the ability to split payment and share reward points would be useful in either situation and was seen as a major draw to using the app over ordering in person or over the phone.

Another user felt that the app was designed to be easy to use for people who were comfortable with texting on a phone, but might be a little confusing for less savvy users. Since the app’s target audience was Millennials, most users would probably be able to navigate the app successfully.

While users enjoyed the features on the app, there were definitely other parts of the customer experience that should have been paid more attention. In future iterations, more attention should be paid to navigation, especially to provide users easier access to the menu. However, the features the design team came up with seemed to overall enhance the pizza ordering experience for users.

What did I find most challenging about this project?

It was difficult to create a prototype in a group setting in such a short time. We were slow to organize and create a consistent communication channel, which led to there being a lack of consistency in the screens used in our prototype as well as some duplication of effort. I also think that different team members had different ideas about what needed to be a part of the prototype, which led to further confusion.

I think another challenging aspect of the project was letting go of our initial ideas and allowing ourselves to explore the problem space more thoroughly. Early on in our discussions, the team came up with the idea of using a chat interface to facilitate group ordering, and many of our solutions were influenced by that central concept rather than being completely unique.

What was the most valuable lesson I learned?

The most enlightening aspect of the design sprint came in day two, when we were forced to develop several distinct ideas in a short amount of time. I initially felt that this step was unnecessary, since we had already started thinking of solutions that seemed good. However, being forced to come up with at least eight different ideas drove us to come up with more creative solutions then we would have otherwise.

It also became clear to me how valuable it is to work in a group. No matter how good a person is at coming up with ideas, there are some ideas that could only come up when working in a group. For example, when sharing my Crazy 8 sketches, one of my teammates was inspired by one of my sketches to develop a totally separate idea that we all ended up loving. This never would have happened if we hadn’t been working in a group.

In the end, the design sprint was a valuable experience. Previously, I was not very fond of group work, but now I can see how important it is when it comes to developing ideas.